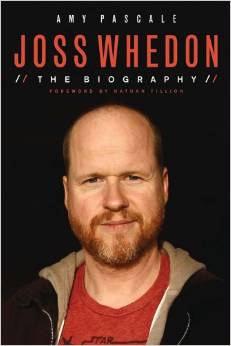 “Nothing else has ever made me like Whedon more than this book.” — Nicole Kline in “Why All Whedonites Should Read Joss Whedon: The Biography” on Geekadelphia

“Whedon owns a writing style that has been described by his peers as being like “a chess master who can think so many steps ahead.” In “Joss Whedon: The Biography,” Pascale helps the reader follow every one of his moves.” — Bob D’Angelo in The Tampa Tribune

“This book is the ultimate package of Joss Whedon history, recollections, anecdotes and lessons learned from the Geek King himself and many, many others that orbit his blazing glory (too much?.. Whatever, I love this creative genius). It’s a wonderful complete piece of work. Amy Pascale has a wonderful talent for keeping it personal and real, going into great depth about a person’s entire existence, and especially collecting what fans want to learn about. I believe the author could make a fine living just writing biographies.” — Lee A. Farruga, The Geeky Godmother

“…there are a handful of revelations. Despite appearances, Whedon’s casts and crews weren’t always happy families. For instance, frequent Whedon collaborator Tim Minear describes a turbulent start to their relationship—the producer almost quit on multiple occasions. And to Pascale’s credit, there’s no idle gossip or supposition. There’s no need; the story of Whedon’s life is often more intriguing than his fictions.” — Danette Chavez on Chicago Reader